We have spent the last year and a half building up Remain networks on Facebook and twitter and have realised great achievements through the supportive community that has developed. The social media infrastructure has allowed us not only to share breaking digital content, but to promote crowdfunders and campaign initiatives, to organise events and pool resources for different projects. I have been amazed by the number of people willing to volunteer their skills and services for remain; graphic designers, scientists, researchers, web designers, van drivers, textiles designers, animators, musicians, comedians, illustrators… the list goes on. But one thing that is markedly absent from all our campaigning is young people. At 23, I am one of very few young remain campaigners. So how do we get them engaged? 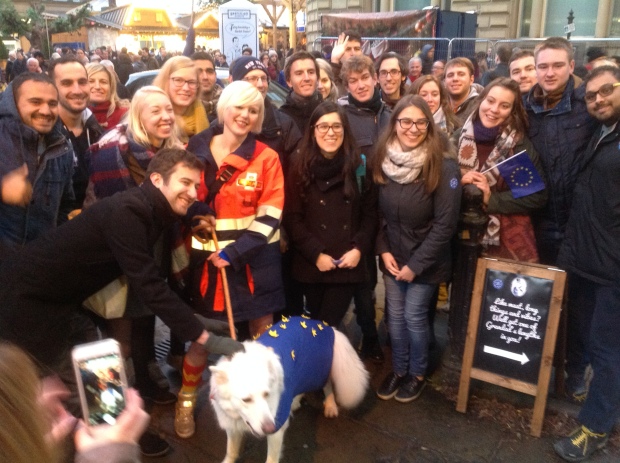 Well, a brief conversation with my super cool, but rather shy, 14 year old sister, drew to my attention the fact that she and her friends don’t use Facebook and Twitter. They use Instagram and Snapchat.

A quick spot check of Instagram shows the Remain presence is woeful. There are 3, 339 post using the #StopBrexit hashtag whereas there are 443, 589 using the #Brexit hashtag. (Those using the latter hashtag are not all necessarily pro-Brexit, but just to demonstrate the lack of the pro-EU message in comparison). Furthermore, most of the StopBrexit accounts have 1 or 2 posts, if any; as though people posted a couple of times at a demonstration then gave up because the influence was negligible. But as with everything, it takes time and sustained effort to achieve good results. 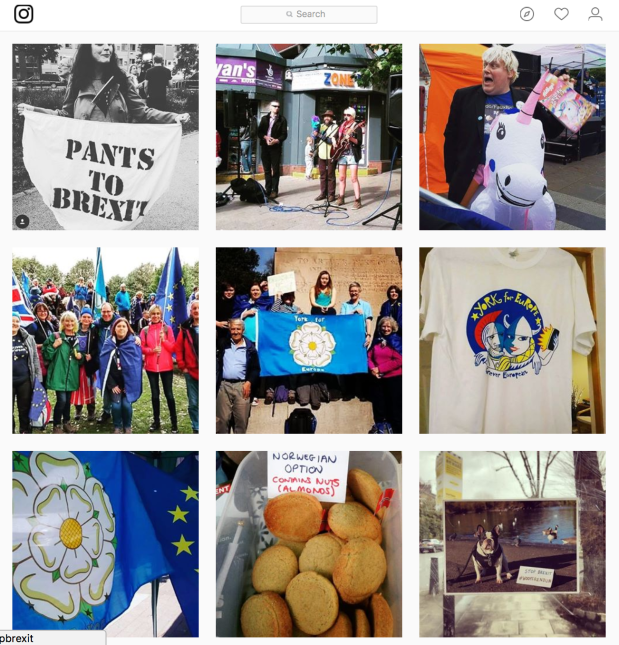 So my initial thought was that if we want to increase youth participation then we need to shift our efforts to Instagram, an image based platform that lends itself well to highly visual #Stopbrexit messaging. But then someone pointed out something I think we should all bear in mind… The reason why “the Youth” don’t like using Facebook and Twitter, may be, because they are too highly politicised platforms. Most of what you see is Remainers and Leavers throwing biased News articles and politicised facts around effectively biting lumps out of each other. If you scroll through your Instagram feed, it is a very “happy-go-lucky” platform filled with smiling faces, cute animals, radiant landscapes and vegan dinners. It’s a cultural platform young people use to share and celebrate their lives, and getting involved in some political spat would be “tres uncool”. It’s no wonder the #StopBrexit posts have such little engagement. 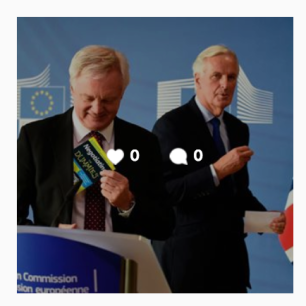 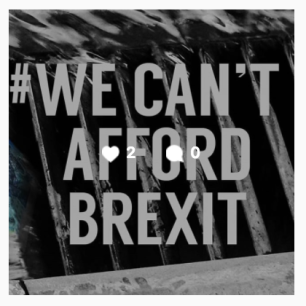 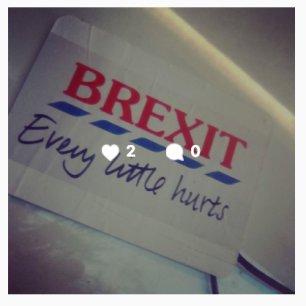 With this in mind, if we are to instigate a “Youth Instagram Strategy” then we need to be a bit more careful about our approach than our typical guns-ablazing, EU-flags-abound, #StopBrexit-(in-mile-high-illuminated-lettering)-or-your-children-will-starve style approach. Instagram is designed to be an app for “mobile devices”, ie. they go out of their way to prevent you from posting from PC/Mac devices. (I have managed to circumvent this through Spoof Agent hosting on my web browser) But there are apps you can “supposedly” download for PC/Mac to upload images to Instagram such as Gramblr, Flume and Uplet, however I have not managed to get any of these to work consistently. You can still “like” and “comment” on images from your PC/Mac so even if you aren’t uploading you can help share other campaigner’s content through engagement and also by following other Pro-EU accounts.

Uploading from mobile devices and tablets, however, seems relatively easy and lends itself to the style of Instagram posts we should be aiming for… NOT computer designed graphics, but real time photos, a little snapshot of your life. This is perfect for demonstrations and protest events, so we need to make sure we are sharing photos with the correct hashtags and tagging users who were there. We can also post photos of things like the “BolloxtoBrexit” stickers currently plastered across the streets of London, or the “The British People have been Conned” stickers I have seen in Manchester. These are great, not only do they have an impact in real life, for everyone that sees the message as they walk by, but we can amplify their impact through social media by using relevant hashtags. Other things that seem to work well on Instagram are the “Wooferedum” campaign which has pictures of dogs with a #StopBrexit placard demanding a “wooferendum”. Dogs photos are always a big hit on Instagram. Likewise I feel we need a “Whiskerendum” for cats. I also like the photos where people have written “Stop Brexit” into the snow on car windscreens or in chalk on the pavement. So the campaign can be subtle, but impactful, keeping with the Instagram style of sharing a “little moment of your life”. Selfies are always a good bet too. 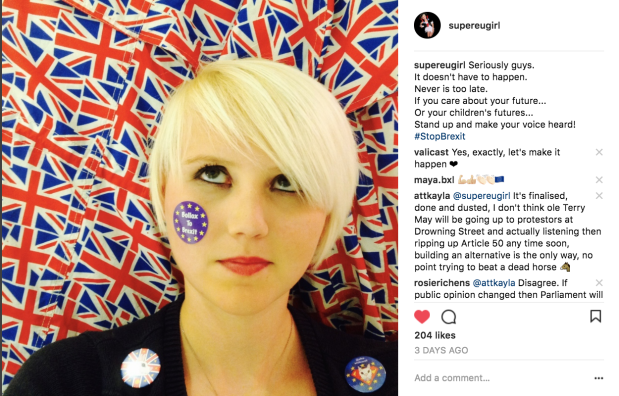 So I would encourage all committed remain campaigners to make an Instagram account, or if you already have, start using it more vociferously. Even if you don’t post much content engaging with other campaigner’s content will help to boost exposure. Check the #StopBrexit #Brexit #EU etc. hashtags and like/comment on all the posts that are on message. We want these posts to start popping up in Young people’s Instagram feeds so that it is on their radar, and hopefully they will be inspired to interact and post too. 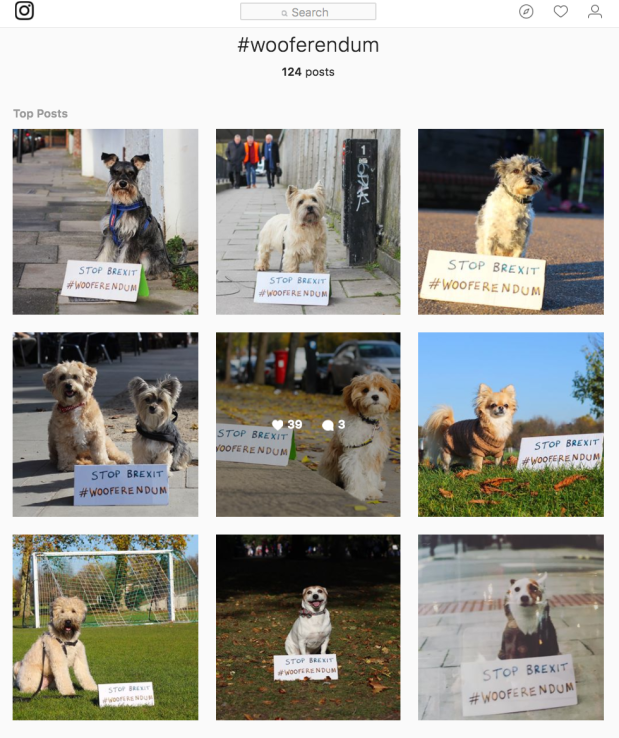 Young people hugely value their European identity, they are angry and upset that Brexit is taking it away from them, however most of them don’t believe there is anything they can do about it. So they are accepting it or ignoring it. We need to empower them to speak out for what they believe in. I have started using the hashtag #LoveEurope alongside the #StopBrexit hashtag to try and encourage people to celebrate their European identity, which #Brexit is undoubtedly threatening to take from them. 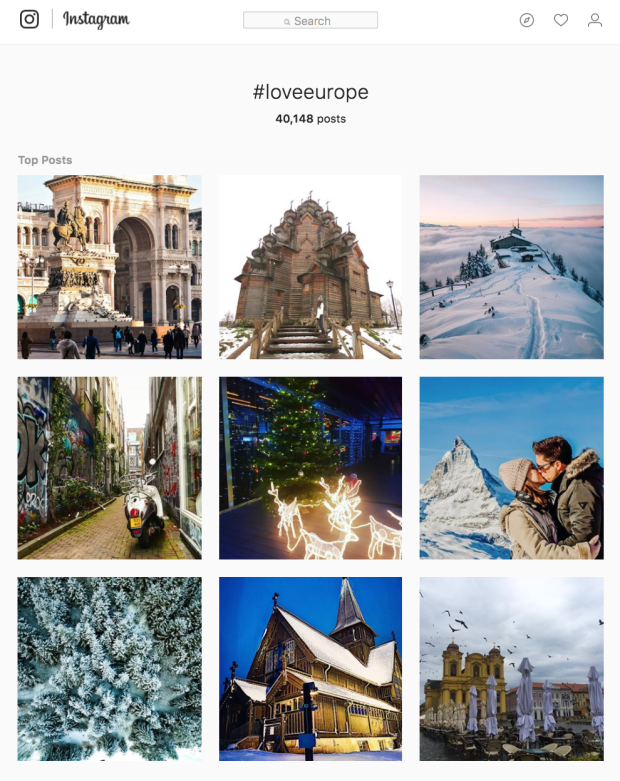