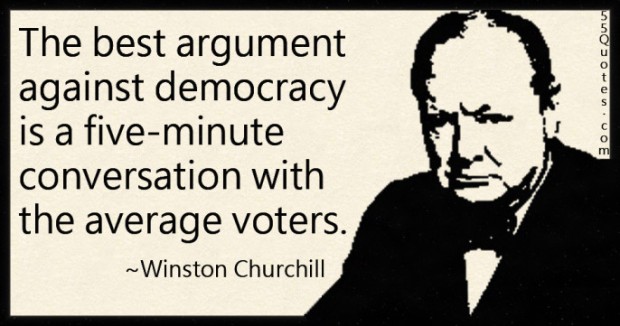 I recently attended a public lecture at the University of Sheffield given by the American Political Scientist, Jason Brennan, about his new book ‘Against Democracy’. I was interested to discover that the book had originally been titled “Against Politics” but his publisher believed that the new title “would sell more copies”. Which is an apt example to clarify Brennan’s own motivations upon which his opinions and the book are founded.

He began the lecture with a “thought experiment” to try and illustrate the idea of incentives. His argument was that, we probably wouldn’t sit down and read a whole copy of ‘War and Peace’ in one evening, which is probably true but doesn’t dismiss the idea of reading the book for its own sake (which I have done and thoroughly enjoyed). Brennan then continued, stating that we would definitely read War and Peace in a single evening if we were told it contained the instructions to the location of £1 million. He finished by arguing that we probably wouldn’t go looking for the instructions to the location of £1 million if we were told it was in an unknown book somewhere in the Sheffield University library, because chances are we would never find it. He then used this thought experiment as an analogy for voting in a democratic system reasoning that voters are apathetic because the incentives are wrong. His argument was that voters don’t care about the influence of their vote because it has a negligible impact on the overall outcome.

This was a very poor analogy that highlights how Political Science depends on a capitalist system of values and beliefs. I dislike the premise that his Thought Experiment suggests that nobody would wish to read a copy of War and Peace in a single evening because of its intrinsic literary value, I also dislike the suggestion that I would surrender all other engagements to devote an evening to acquiring £1 million which was not deserved or earnt. If that were the case, I would probably be playing the lottery to try and win millions of pounds, which I might add I have never done. His analogy also assumes that people only vote in their own selfish self-interests, (unless he was suggesting that we would read War and Peace so that we could donate the £1m to the common good?) When in fact I believe many people use their democratic vote for what they believe is best for society as a whole. So our individual votes may have negligible impact, but that doesn’t mean we should care any less about them, Emily Davison threw herself under a horse for the right to vote and a lot of people still do genuinely care. Although I will admit there is a significant task ahead of us to engage and educate more people who are currently indifferent or disinterested in politics.

Brennan referred to a “One man one vote democracy” which I questioned during the Q&A at the end. In reality the power of influence can have a big impact on democratic outcomes. In the age of social media, respected figures or politicians (take Donald Trump as a bad example and J.K.Rowling as a good one) have the power to share their political views with a wide social network so that the sphere of their influence may have a significant impact on the outcome even if their individual vote does not. One of the possible alternatives to democratic votes that Brennan advocated was a weighted system where more educated individuals have additional votes or where voters are forced to take a general political knowledge quiz to show a basic level of understanding before they are allowed to vote. Although these ideas are nice in principle, I think they are potentially very dangerous because they use knowledge as power and undermines belief systems that are based on other values. Also, it is hugely dependent on how you define what knowledge or expertise is required and it is risky territory handing that much power to any authority, particularly if their “incentives” are based on a capitalist model rather than one that promotes tolerance, happiness and kindness.

Brennan himself is a very charismatic and engaging speaker, he is fairly down to Earth and has a tendency of skipping over technical academic reasoning in favour of gimmicky “jelly bean” and “robot transformer” metaphors. A style that I’m sure earns great favour with his students, although personally I was feeling slightly nauseated by the amount of times he mentioned “cookie jars”.

His lecture was followed by two guest speakers, the renowned philosophy professor, Angie Hobbs who was rather a shock contrast when she started referring to examples from Ancient Greek history to illustrate her own arguments. She was followed by Natalie Bennet, the self-termed “Blunt Australian” who concisely took his book to pieces, arguing that the book was a “dangerous” threat to a real democracy, that hasn’t yet been achieved. I was very impressed by both of these female speakers, their academic knowledge and their strong arguments. Their ability to speak their views is testimony that it really was worth Emily Davison’s ultimate sacrifice to advance the progress of women in our society. Now it is our duty to respect her efforts and turn out to vote in the General Election. 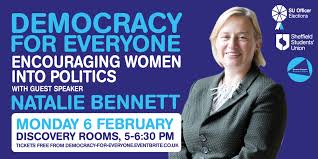